Q: I’m having problems with my ipad mini running iOS 7.0.4 JB Envasi0n. Everything is running smooth and no hickups. The problem I have is when I try to install tweaks the cydia app crashes back to springboard. I can download some apps and tweaks but not all. I got to install winterboard perfectly fine but cydia crashes when I try to install AppSync 7.0 + and Movie Box and iFile. I did the same to my iPhone 5 running same OS but everything runs great on it and never crashes. I been JB for over 5 years and have never ran into this problem. Can someone help me please or point me the right direction. Thanks 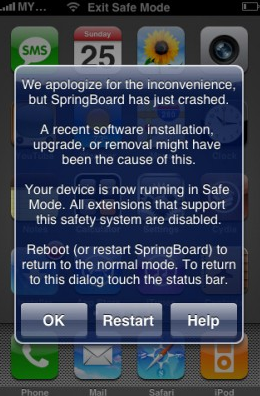 A: You’ve done everything right in that you’ve jailbroken your device first before installing Cydia apps. Since not all Cydia apps crash during download, it seems that only certain apps are giving you problems at the moment. My advice to you would be to delete those apps and reinstall them once more.

I would first recommend downloading iFile, Movie Box, and AppSync 7.0 once more after you delete them as they are currently. If you continue to experience the same problems, you should notify the jailbreak developers responsible for the apps and alert them as to the problem with downloading them onto your iPad Mini. It may be the case that if you’re having problems with these specific apps and not all at Cydia, the apps themselves may stand in need of bug fixes before they’re safe to download for other iPad Mini users. It could be the case that iFile and Movie Box, for example, are not yet compatible with iOS 7 – even if the jailbreak tweak itself doesn’t specify compatibility.