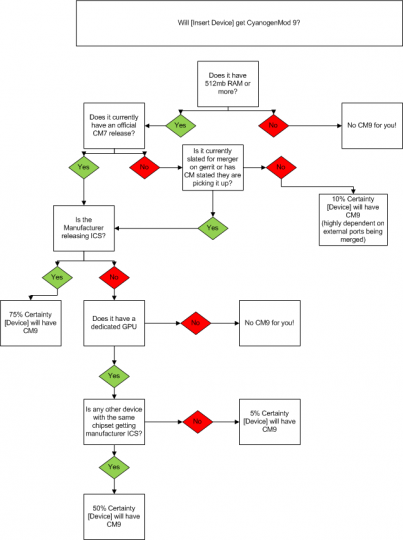 CyanogenMod is one of the latest firmware for the Android OS and a lot of Android phones and tablets are supported by this firmware release. But the most users complain about being unveiled from the enchants of this release. The most conscious question being asked to the providers is will it go good with my phone/tablet? CyanogenMod9 is the latest release which unofficially may support your tablet or phone but in official terms it is supported to only a bunch of phones and tablets. To reveal the mists of secrecy about the list of gadgets being supported by this firmware, CyanogenMod released a flowchart which allows you to check the status of your phone or whatever relevant gadget you own is whether supported or not.

Well to enlighten you with some conditions for this release we need to go back to the summers of 2010, as we all know the original DROID, Nexus one and various other releases came up with a 512 Mb of RAM or less. If you still got a tablet/phone/Ereader/oven which has somewhat similar characteristics to the above mentioned one, then you will surely fall in the category of the people who can’t officially go for this release. To go more concise and precise if your device comes with a official CM7 release and its ICS release is being provided by the manufacturer then you can surely go for the update, but if you lag behind on the CM7 official build and your manufacturer can’t provide you the ICS release then you can’t upgrade your device to this CM9 release.

Well now if you aren’t qualifying for the guidelines the CM9 are asking for don’t feel distressed, there are a lot of people out there who help you out by providing you somewhat similar updates to the official ones. CyanogenMod is an open source and with some trickery at its kernel level it can be made a working product for most of the devices out there. There are a lot of such updates in the market for almost every popular device, some known as kangs. Either you can go for one of these if you are too desperate or you can wait till your manufacturer comes up with something that would reckon the official way of updating the releases on your device.