Ever since the iPad shuffled awkwardly into the room, causing everybody to fall about in hysterics until someone touched it, immediately silencing the laughter in favour of wildly clambering over each other in raucous attempts to stuff money in its shiny face, we’ve been seeing the world of technology play a tentative game of ‘catch up’. With Samsung’s fantastically failed attempt at incising their way into some of that Apple pie, and the advent of ultra-fast Ultrabooks, what can the search engine tech giant Google really come up with to differentiate AND to compete? They can come up with the Nexus 7. 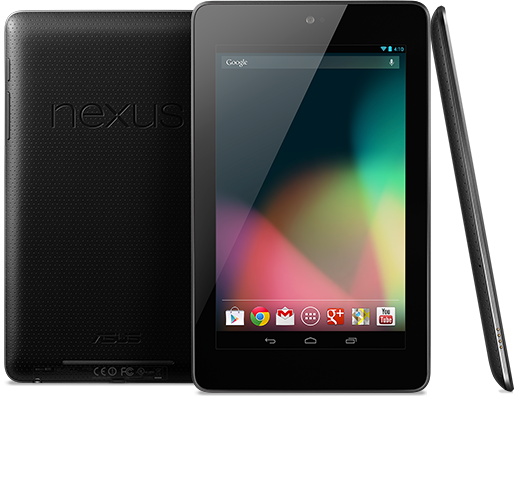 The Nexus 7 isn’t the next iteration of the race of androids Dick Deckard was assigned to ‘retire’, and is in fact Google’s most recent foray into the hardware world, and more specifically, its ‘big push’ to make up some lost ground to those ever-increasing iPatrons . Essentially though, there are a number of factors that really set the N7 aside when it comes to the competition.

The tablet itself is a beautiful, sleek piece of kit that retains that all-important mesmerist, feel good factor; an art those iDevices have perfected. Gadgetry has to be pleasing, it needs to feel premium, like you’re holding onto a slab of tomorrow, and Google have certainly achieved that with the Nexus’ aesthetic features. From the buttonless front face, punctuated by a 1.2 MP front-facing camera, to the sleek leathery dimpled reverse that many reviewers have likened to the kind of material you’d find used on professional racing gloves, there’s no doubt that this little package carries the prestige factor.

Speaking of little packages, the dimensions of the Nexus 7 are one of its most notable features, and something that puts it in an entirely different arms race to the iPad behemoth. The 7-inch screen sits this device snugly in the gap between smartphone and full blown tablet, building a similar bridge to the one the Kindle Fire tried to erect. Its ity-bity waistline, measuring just 10.45mm thick, keeps it light and easy to hold, and even pocket. Depending on how big your pockets are, of course.

The other big differentiator is the price. The Nexus 7 weighs in at an astonishingly attractive £199.99, making it one of the cheapest, most versatile and top-range tablets on the market. This price tag is a big win for Google, something they’ll undoubtedly be applauded for, delivering on competitiveness where its rivals refuse to do so. Indeed, it’s chief competitor announced just this week, can’t contend with a price tag this deliciously reasonable.

What You Can Do With It

Running on Android’s latest software, Jelly Bean 4.1, the Nexus does everything you’d expect from the latest tablets, coming complete with Google Play’s incomprehensibly vast library of Apps that don’t just feature infuriated fowl being hurled at precariously balanced wooden structures. The pre-installed Chrome web browser works beautifully, gliding from page to page, and pinch zooming without so much as a hiccup, whilst the voice recognition allows you to search Google with the sweet sultry sound of your own voice.

Google Now is another of the device’s speciality party tricks, predicting the kind of information you’re going to require based on your previous actions, your location and all sorts of other data collection. You’ll receive train times or directions without having to go through and search for them individually, and there’s a prompt button with suggestions for other information your little tablet has decided you need, streamlining the whole search and retrieve nature of finding things out via the internet.

As one of the sleekest, most usable and feature-packed devices on the market, coupled with the utterly inarguable sub-£200 price and host of built in Google apps (Gmail, G+ , YouTube etc.) as well as Google Now, the Nexus 7 has sliced out a sub section of the market to call its own, building some bridges whilst it’s there and essentially, holding its head high in an overcrowded market. iPad Mini beater? The price alone sets it peering down on its slightly larger cousin several times removed but for the real facts, well, we’ll have to see.

This article was written by Rob Vicars on behalf of Find Me A Gift. For the latest gadgetry, including the Nexus 7, and plenty more besides, visit the website today!