Android has always been known for its open-source system, allowing all sorts of manufacturers and companies to offer the operating system to its consumers in all phone and tablet shapes and forms. And even when Android consumers choose to root their devices, root apps have still worked on the newest update to Android OS (whose nomenclature derives from desserts such as “doughnut,” “jelly bean,” and  now “Kit Kat”). 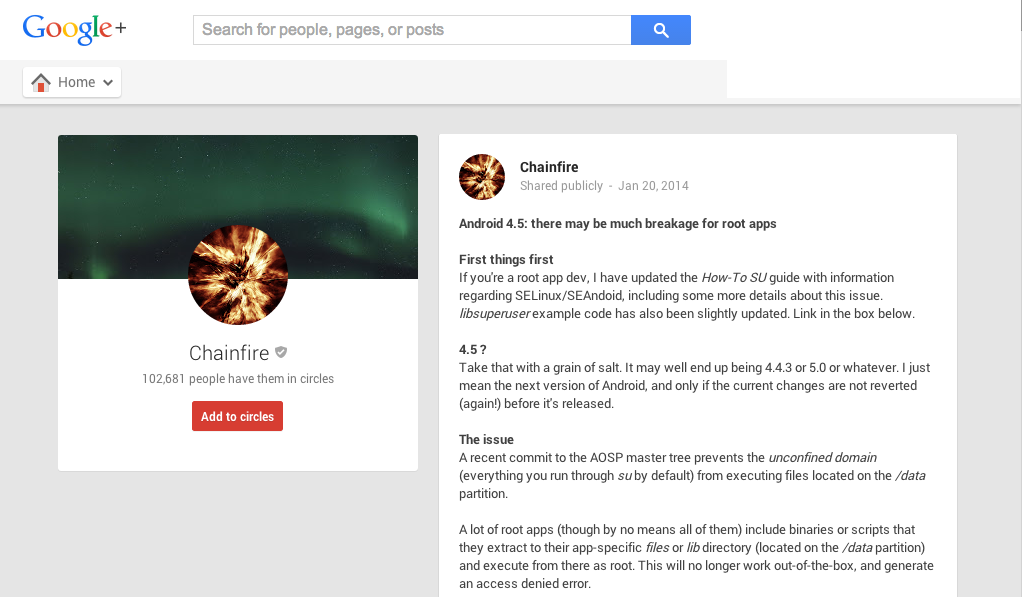 A new update to Android 4.5 or even Android 5.0 will disable root apps and prevent them from working. This statement comes from Android app developer Chainfire, who made an official Google + announcement earlier this week about the upcoming crisis. The problem with the new Android 4.5 update, Chainfire says, is that it will stop allowing root apps to be executed on the /data partition. The data partition is responsible for running “su” apps, “su” being acronymic for “super user.” Super user is an application that grants your phone root access so that you can download themes and utility root apps that you cannot download otherwise.

You can view Chainfire’s root apps announcement with an active Google + user account.

While root apps could face some trouble in the days ahead, Chainfire does note that there are some workarounds. “Though there are certainly several ways around the issue for the affected apps, there doesn’t seem to be a single generic solution that would work for all cases and can be implemented in the su command itself (though of course if you can come up with one, I’m all ears).”

Chainfire notes that the AOSP commits that will disable data partition root execution are already available, and tells users who love and use Superuser as their root application of choice to “update[ing] it to v1.91” on their device as quickly as possible.

While Android struggles with Android 4.5 Kit Kat and root apps, iOS has never struggled in this area. Once you update your device and remove the jailbreak, you lose all your jailbreak tweaks – with the most important ones remaining saved at Cydia. Should you ever return, you may just find many of the apps you downloaded remaining. Some, however, will not remain.

Around the same time as root apps and Android 4.5 are becoming a major concern for the rooting community and Google, Samsung has decided to prevent Note 3 users from using other smart covers on their devices. After upgrading to Android 4.4 KitKat, XDA Developers can no longer use other smart covers apart from Samsung’s own line for the Galaxy Note 3.