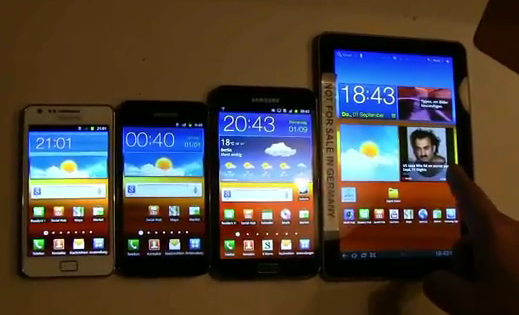 Smart phone displays are getting bigger day by day. Android users are already used to it but do all smart phone users like bigger displays? The answer lies in a report that came from Strategy Analytics, which says nine out out of ten smartphone users like to have bigger displays than they have previously used. Besides the current phone manufacturer  they were using , they want larger screens. It was found in a report that most of smartphone users prefer 4 to 4.5 inches screen size as long as their phone is thin. The report also found that females consider phones with a bit smaller screen size than males. The Analysis was done on US and UK smartphone owners who own Android ,iPhone, BlackBerry, etc and used prototype models of smartphones and let the smartphone users choose from them.

Does this means that future generations of smartphone sizes are tending towards tablets? Of course “No” because you cant increase the size of your hand, and your jeans pocket also comes into consideration. Obviously smartphones like Samsung Galaxy Note and LG Optimus aren’t meant for everyone. Almost every smartphones manufacturers have at least entry level smartphones with screen sizes between both 3.2 and 3.7-inch, but the possibility of getting a 4 inch smartphone with high-end specs is impossible these days. For those who are size conscious and need high-end specs, there is always an iPhone.

There is no doubt that larger screens are good for multimedia consumption but a phone should be potable enough to be hold in a hand or to carry it out in your pockets, that’s whats phones are meant for. For those who like larger displays and wants tablet but can not afford to buy a second device, a larger screen sized phone is a way to go.

What screen size suits you best? Tell us in the comments