We have seen some of the coolest Phone Concept designs in the last year and continue to witness some of them in this year too. While some of the Phone concepts are too cool to become reality, some are so good that a person can even kill for them. However there are some concept Phone designs which I wish had never come to people’s  minds. These Concept Phone designs are no matter unique, but I bet no Normal Person will ever want to take these types of Phones with them in front of Public. Here are 12 Weird, Foolish and pointless Phone Concept design that no company will ever want to manufacture. Check also, best iPad wallpapers. 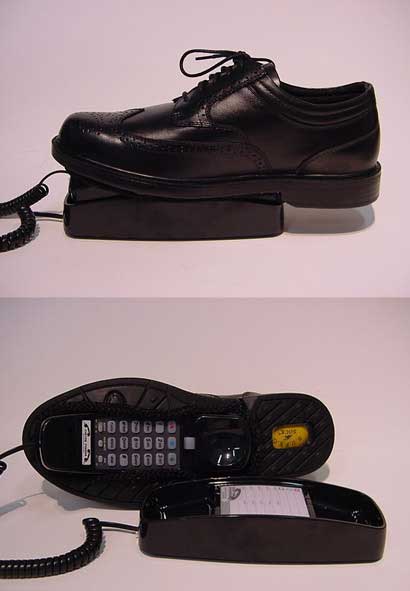 The Shoe Phone is already being made, but not by companies, but by people Steve Carell of Maxwell Smart Fame . This Phone was shown in the Movie ‘Get Smart’ and has become quite famous after that. People all over the globe try to build their own Shoe Phones but I guess they plan to use it inside their homes only. The last thing for a person would be to walk on the street with a shoe on his face and all other people looking at him as an idiot. 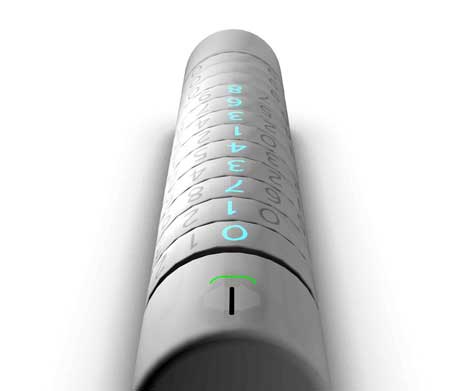 The whole idea of having a Mobile Phone is that it can be used in emergencies. The Cryptex phone is so complex and tough to operate that it would take at least 4 minutes for a person to dial a number on this Phone. If you want to dial a number, you have to turn the dial of every element to the desired cipher. You have to place the numbers in such a way that the umber you want to dial is in line with the green LED. If you want to hang up the call you turn the first segment to “hang up” (red LED). The phone works without buttons and without a display and based on the old dial phones.

This phone is best suited to Restaurants and Hotels. This Phone was featured in the movie “Juno”. It can create too much confusion among Kids and Adults alike. Infans will most of the time take it as eatable and the Adults will end up searching and yelling for their “Hamburgers”. 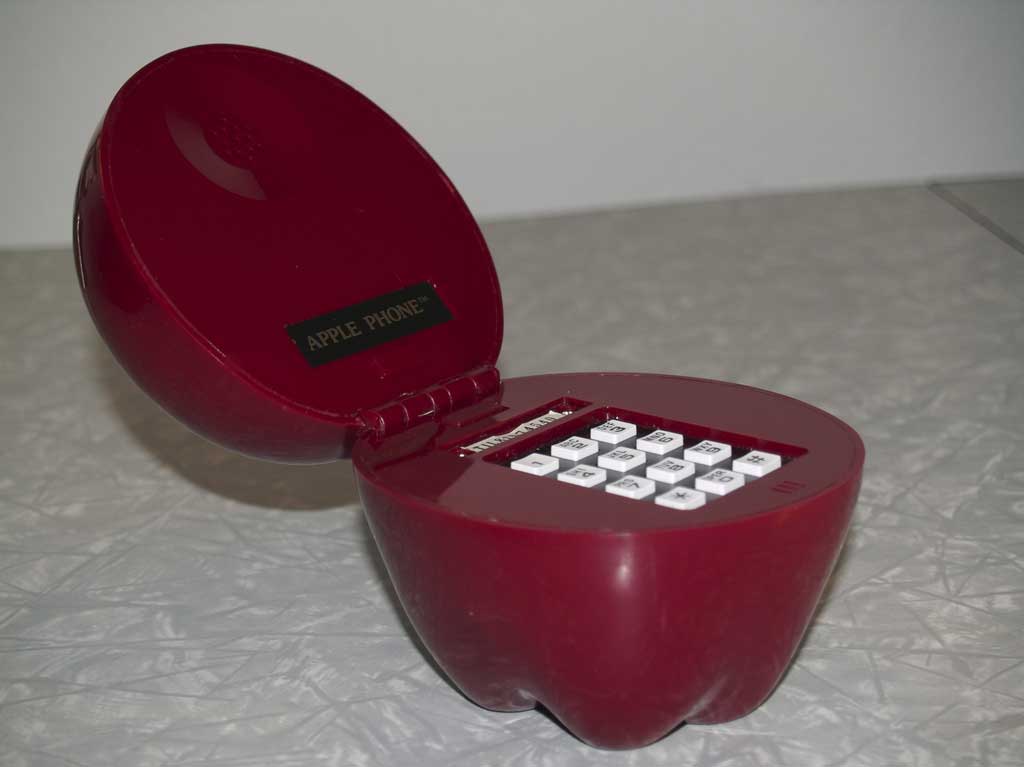 Michael Calanan says, “Call me a luddite but I much prefer this vintage landline version of an, ahem, “Apple” phone.” And here’s what it looks like with the top half closed” There is nothing much I can say about this phone. Just that is too bulky and god know about its ergonomics. 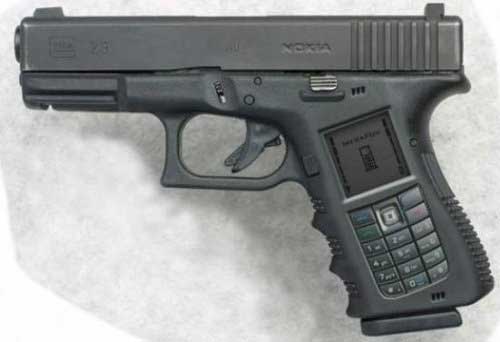 Why would anyone need a Mobile Phone that doubles as a Gun? You bet it, to call 911 after you have shot someone. That is the best use of this phone I could come up with. This might also be useful if you forget things a lot. Most of the people will forget to take a gun with them when they have to go for walk, but only a few people forget to take their cell phones. The Cellphone Gun concept by Nokia is one of the many designs that are lethal enough to make the patent office reject it right away. 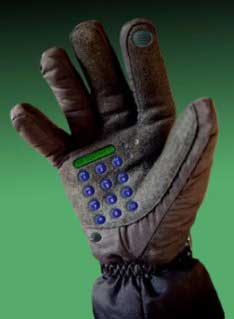 The Glovephone is  just a concept. Connecting via Bluetooth to your handset, the Glovephone is meant for extreme weather conditions and rescue workers. There’s even an emergency button for if you find yourself injured with limited mobility. The speaker and microphone are cleverly placed. 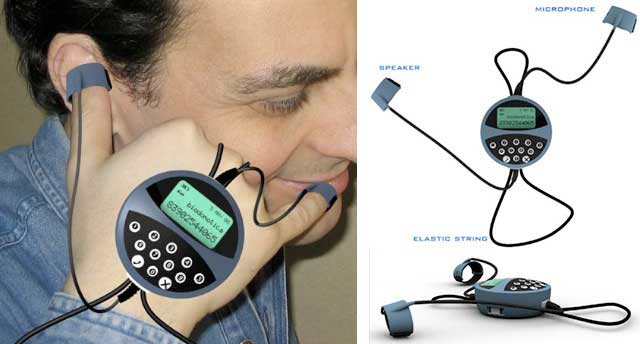 The Gesture of extending the thumb and the Pinky and talk into the pinky when you want y=to show someone to call him has become famous enough for this designer to come up with an idea of actually talking like that. Just think about the pain it would take to first strap the wires on the back of your hand and then the pain to keep the hand in this position for the duration of the call, awkward. I hope that this concept remains a concept forever. 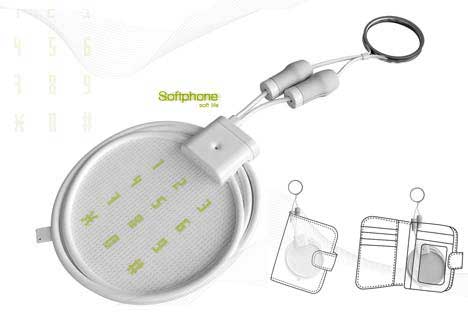 This phone might do good with people that love to walk on their walk, or just beat it for bad news’. It is made of fabric and silicon making it squeezable and huggable, since it is created with that in mind. Moreover, you can make a call or hang up by the level of squeeze you give this cellphone.

The Kinetic Phone is made of aluminum and glass. The central sapphire glass reveals the generating and charging unit. Power comes from kinetic energy similar to that found in watches that use oscillating weight to power a mainspring. It doesn’t include anything useful but it may be best used in Electricity crisis. If the battery runs our because the phone was sitting still for too long, just give it a few upside down turns to get the kinetic rotors going again. Atleast your Grandfather will be happy after seeing this phone and can say, “Look, you still use ‘our type’ Phones”.

The Natural Year Phone is made of hay, sans screen and soft keys. The whole ideology behind designing such type of phone  is the maximum use of disposable products made from natural sources so that dumping the phone might not be a problem. 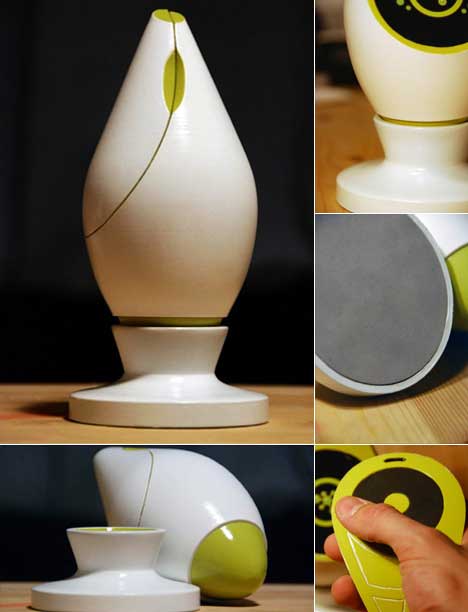 While most of the people will love the design of this beautiful product, most of them will prefer not to own it. This Concept phone derives its inspiration from Hosta plant which is a foliage plant and comes in a vivid range of colors. There is no technical info of the working of this Concept phone available, but you will get the idea of how this might work from the Image Gallery. 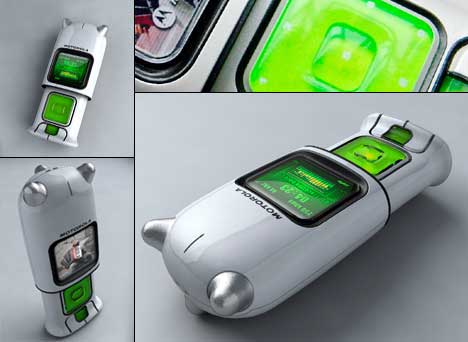 While most of the Mobile Phone companies today try to make slimmer and slimmer phones, some people still come up with designs that are bulky and too big to be put in pockets. The moto Concept by Joseph Liang is one such type. The design looks cute, but people don’t buy phones for their designs alone. The phone Features a very limited button selection, camera, color screen and button hiding slider.

So, these were some of the Least wanted phones that have ever been designed. Some of them are really good looking and some are next to useless, but overall all the Concepts are cool and bizzare and most of all, worth knowing about.