The Moto G has become one of the most intriguing, yet inexpensive quad-core smartphones on the market. When you add in prompt Android updates, who wouldn’t want to buy this device?

For customers at AIO Wireless, the Moto G on AIO’s network is now set in stone, although AIO (an AT&T MVNO) allows customers to bring unlocked devices of all kinds onto its network. The Moto G will become available both online and in stores on Valentine’s Day (February 14) for those who want to buy their phone from the same carrier to whom customers pay their monthly bill. 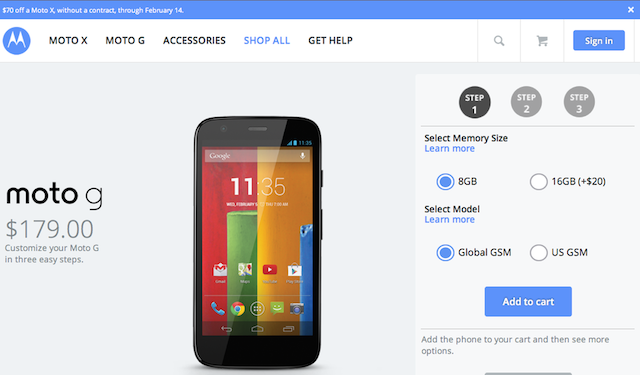 The Moto G’s specs and features are not that commanding, but the device does offer a 4.5-inch display for consumers who do not want to ride the 5-inch-display wave that’s turned popular these days. As for AIO Wireless, the budget Android smartphone could not have come to a better carrier. Google, when it owned Motorola, established the Moto G to be a smartphone best equipped for AT&T’s network; since AIO is owned by AT&T, it makes since to see the phone come to prepaid customers.

AIO, however, is not alone; US Cellular will now carry the 8GB Moto G today, February 10th, and offer the budget smartphone on its new no-contract plan. The off-contract US Cellular plan now offers you 500MB of 4G data, unlimited 2G data, along with unlimited calls and texts for $50 a month. Some say that there are 1GB and 2GB data options for off-contract US Cellular customers, with the highest-paid prepaid agreement standing at around $65 a month with 2GB of data.

AT&T, to turn competitive in the prepaid space, now offers 500MB of 4G data for $40 each month (basic feature phone plan), 2.5GB of 4G data for $50, and 5GB of data for $60 a month. AIO Wireless once offered 7GB of 4G data for $70 a month, but has dropped its current data offering by 2GB for reasons unknown. As for the price of the AIO Moto G, you’re looking at $149.99 – a price drop from the $180 price tag for the Moto G via Google’s Play Store website. US Cellular shines even better: you can get their off-contract plan with a Moto G that costs just $99 out-of-pocket.

India seller FlipKart started selling the Moto G last week, and it seems as if FlipKart will likely become a Motorola seller in days and years to come. FlipKart’s 16GB Moto G model sold out in 15 minutes.

Anybody interested in picking up the Moto G with either carrier?