Ever since the iPhone and iPad were jailbroken, people have been doing cool stuff on their devices by installing great apps from Cydia, that they would not have been able to install otherwise. Cydia is sort of like an unmoderated App Store where you find all kinds of apps that Apple is too reluctant to approve for the official marketplace.

On Cydia, you can find apps to change almost everything about your iPhone. You can install unsigned apps using Cydia, download apps like iBlueNova that let you send and receive files via Bluetooth. However, in order to download apps, you have to add proper Cydia sources. Cydia sources are exactly what the name suggests, they list apps you can then install.

Cydia comes with a few stock repos or sources. You can find many apps on these stock repositories but for many other apps, you have to add a source first. We have collected 20 best Cydia sources or repos  you can add to your device to find numerous apps that let you do more on your iOS device. 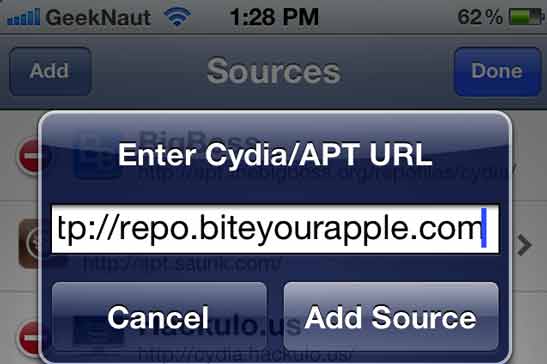 Some of the notable apps in this repository include Full Screen for Safari, GroupSMS, Home Page in Safari and Wifi Sync. That last one is kind of redundant in the iOS 5.0 and later versions as Apple has made that option default in new iOS version. But, this source is still good for other great apps for cydia. 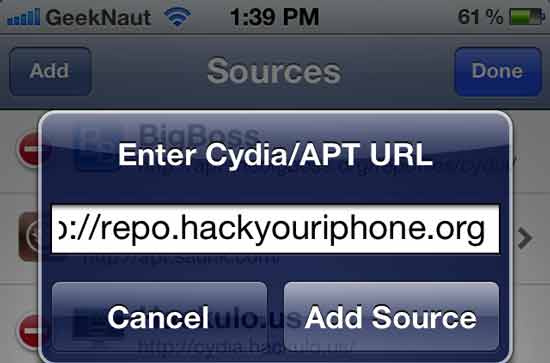 If you want to customize your iPhone or iPad in the best way possible, this cydia source is a god send. It includes some of the most famous Winterboard themes for iPhone including Boxor HD, Elite PRO HD, Glass Orb, iFlat, iFlat4 HD iPad, Revolve HD/SD, SBHD,Snow Leopard and a ton more. It also provides you with downloadable content as well as cheats for games. 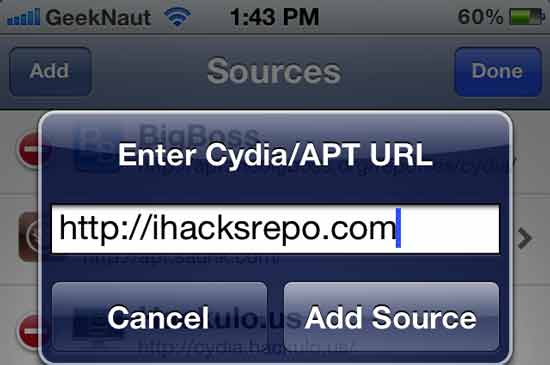 This source includes a ton of different themes as well as apps. Some notable apps include biteSMS, Applocker, RetinaPad, FaceBreak, SleepFX, SMS+, Springtomize 2, Infinidock, Inifinifolders etc. You will be able to find themes with matching keyboards on this cydia source too. 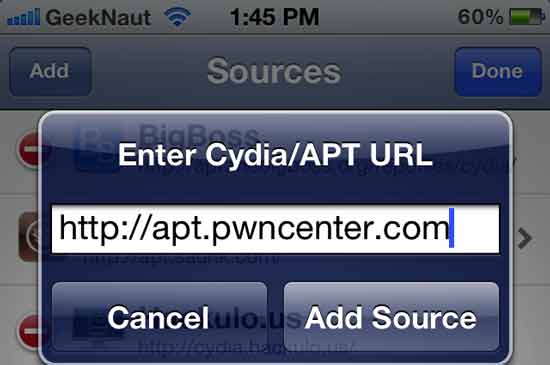 So, you have all kinds of different apps and games but you want to customize your jailbroken iOS device to its fullest. On this repo, you will be able to find great ringtones, wallpapers and themes that let you do just that. 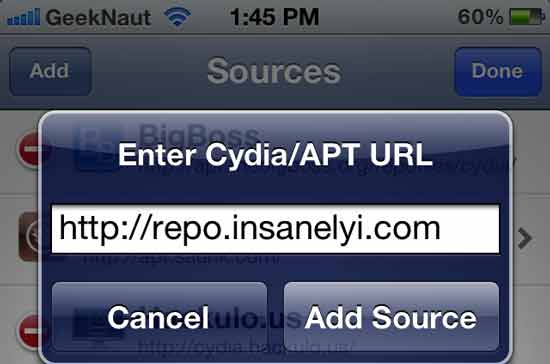 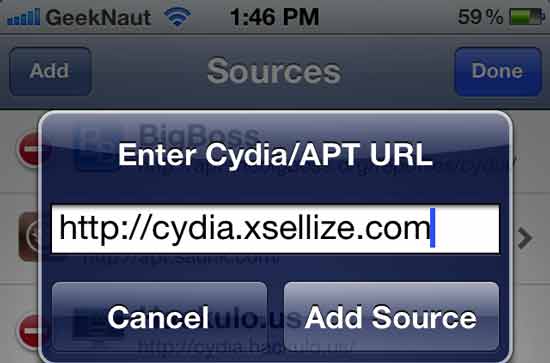 Home to some popular apps like FoldersWithinFolders, Inspell, MCleaner, MySMS, this source also has some great icon packages that make it easier for you to navigate through the repo efficiently. Also, if you are into gaming, you will love this source. It contains popular emulators like Nintendo 64, NES and Gameboy. Comes with a lot of ROMs too.
Our Favorites: Game Boy Advance, Nintendo 64, Cycorder, Cyntact, CLASSified HD, FBUploader, iBlacklist. 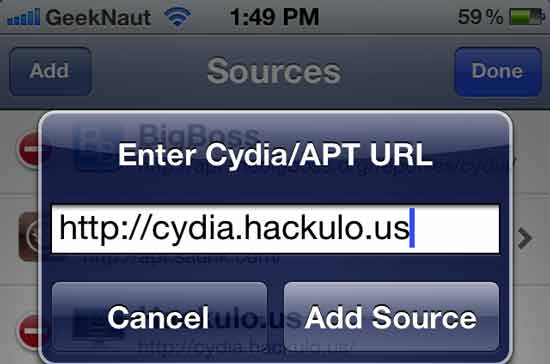 One of the most popular cydia sources out there, Hackulo.us is home to apps like AppSync, Installous and Crackulous. This apps lets you install App Store apps that aren’t signed by apple. Especially good if you are trying to install your own app on iOS but don’t have a developer account.
Our Favorites: AppSync, Installous, Crackulous. 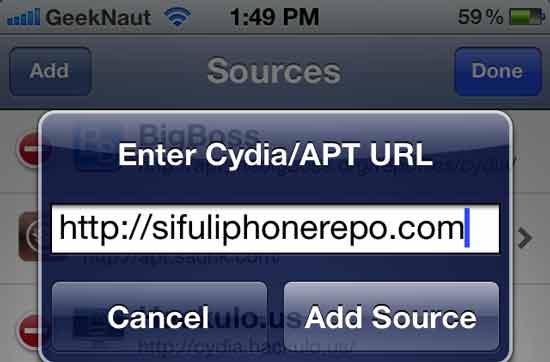 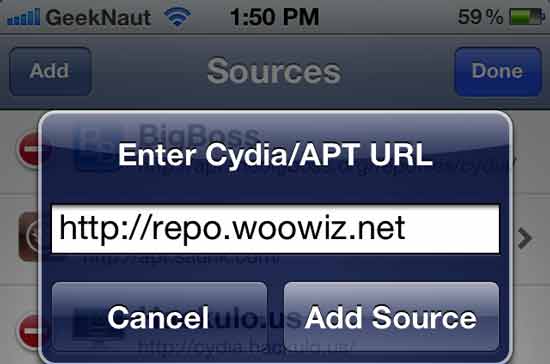 Apart from containing AppSync for all iOS versions, WooWiz source contains apps like Gamecenter, iMovie, LiveClock for iOS4 and ActionMenu.
Our Favorites: YourTube, SafariFix, Flash for iPad and My3G. 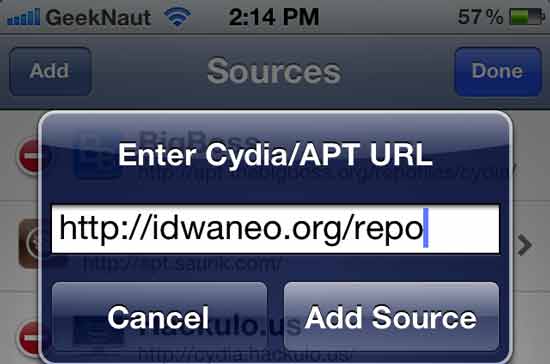 Idwaneo Repo contains a lot of DLC (downloadable content) for some of the most popular games for iOS. Some typical ones include Angry Birds, Anger of Stick, Asphalt 6 and Battlefield. Not only that, this source also has some great wallpapers and apps.
Our Favorites: Temple Run DLC, Game DLCs, PdaNet, GridTab for Safari, SleepFX, VideoLock, CameraButtons etc. 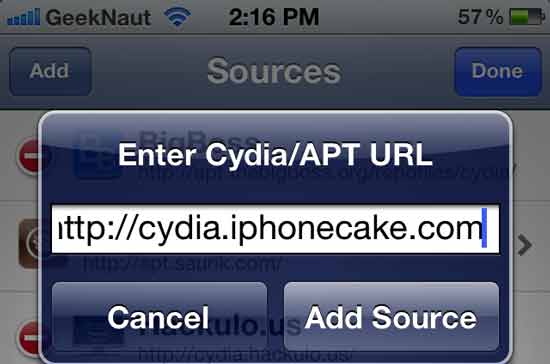 iPhoneCase repo is home to AppCake for cydia. AppCake is simillar to Installous since it enables you to find and install cracked iOS apps right from your device. But, it has another unique feature which lets you search for the Cydia apps as well.
Our Favorites: All App Store Apps and Cydia Apps can be downloaded from here. 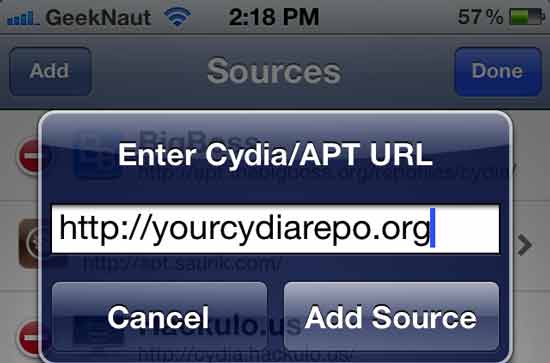 If you are looking for some tweaks and hacks for your iOS device, this repo is a one-stop-shop for you. This cydia source contains almost all the tweaks and hacks you can think of. Apart from that, you will also be able to find other cool cydia apps here.
Our Favorites: MobileTerminal, iSilent, PwnTunes and others. 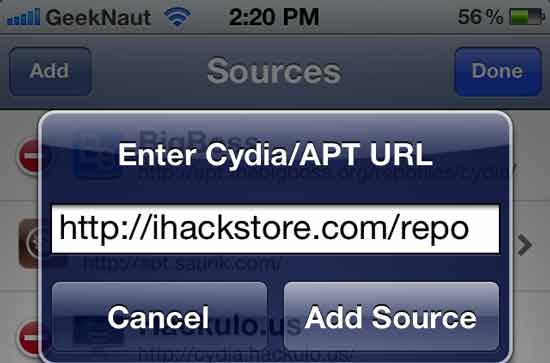 This repo contains an extensive list of apps and themes for your jailbroken iOS device running Cydia.
Our Favorites: AndroidLoader, AirServer, AskToSend and FullScreen for iPad. 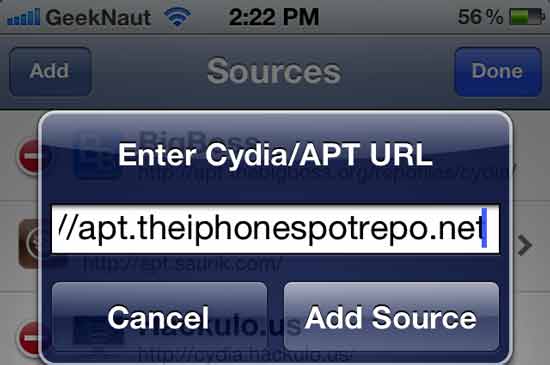 If you want a 5 icon dock, you need this source added to install it. No doubt, other sources also let you install themes with 5 icon docks, but this one has it available separately. Apart from that, you find some amazing themes and apps on this repository.
Our Favorites: xBackup, Wuppy Pro, WiFi Control and VideoLock. 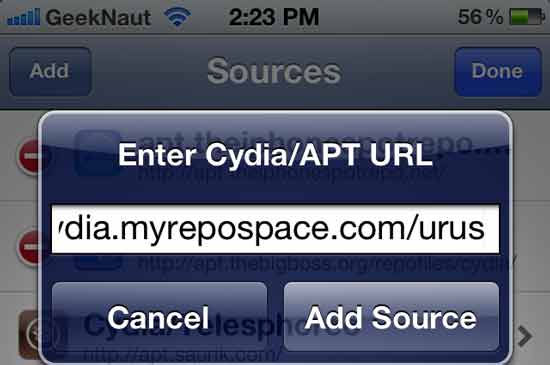 This repository is unique in a way that it offers cracked in-app purchased content for free. You will be able to find popular in-app content like the mighty eagle in Angry Birds and Jetpack Joyride, Line Birds, Plants vs Zombies and Tiny Tower content.
Our Favorites: In-App Content for a lot of games like Angry Birds, Mega Jump, Temple Run etc. 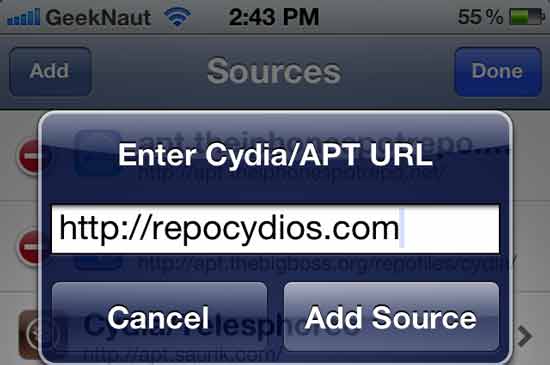 With this source, you will be able to download apps and games like Alarming, AllMail, AppAlert, BloodSteel etc. Many of the other popular cydia apps or tweaks are available on this source too. 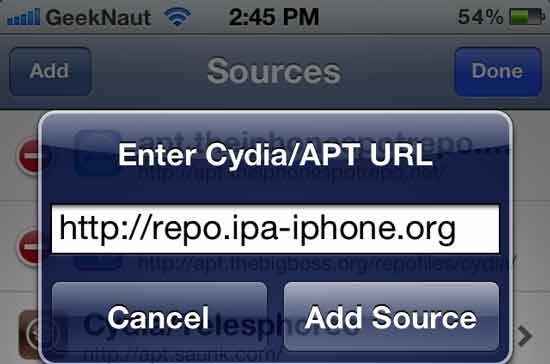 With this Cydia source you will be able to find some of the most wants and sought after iPad themes and tweaks. There are a lot of iPhone / iPod Touch themes available on this repo too.
Our Favorites: Absolution, UINique iPad Theme, Alert Artist, Angry Birds DLC, Auto3G, DarkHaz3HD iPad and a ton more.

There you have it, a great list of sources that you will ever need. Note that we had to remove a few sources like P0dulo, iCauseFX etc. because they are no longer available. If you want to share a repo you love, let us know and we will add it.