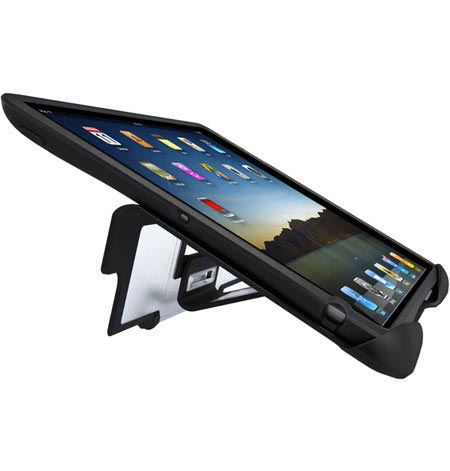 Company brands the Reflex Series Otterbox as the blend of protection and styling. The iPad 2 case is definitely lighter and more compact than its predecessor, the Defender Series. The Defender Series iPad 2 cases are bulky due to the extreme protective measures incorporated in them by Otterbox. The company launched Reflex Series with a motive to overcome the issues raised by defender series. The Reflex Series is more slim and sleek and provide great protective features to save your iPad from any mishap that could happen. Otterbox tried to make it more simple to use, easy to pack and carry. Most of all, they made it easier to put on an iPad 2 device.

The Otterbox Reflex Series is made up of hard black plastic which is actually a single layer dual density material. To be precise it’s a polycarbonate molded with TPE Rubber. The rubber coating runs down all along the perimeter, about an inch from the edges. The most interesting thing that I found about this case is its sliding feature, the feature about which most of the contender cases failed to make an impression.

This definitely gives Otterbox Reflex Case for iPad 2 a leading edge. The case actually splits into half at the middle and it then slides off. The slider is coated with a soft lining from inside, which is quite helpful as it prevents scratching while removal or insertion of iPad 2. It doubles as an iPad stand too, perhaps many people would prefer a DIY iPad stand more than this one. Doesn’t change the fact that this case has it built in. 2 in 1 accessory is better than 2 different accessories, right?

The sleep and wake button is provided with a rubber covering. The rubber cover requires more force to operate despite of that the buttons are still Clicky and not much spongy at the same time. The case also provides opening or vents for the microphone, camera and speakers. The vent for speaker is unique in itself. It provides as exceptional audio pathway, which redirects the sound towards the user for a better and brilliant listening experience.

You might also want to check iPad designer cases and best iPad sleeves.